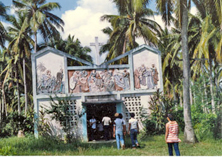 The inspiration for the charity started in 1972 when Mr and Mrs Francisco & Anastasia Manlises donated a piece of land to the village of Calingag in Pinamalayan, Oriental Mindoro, so that the community could build a small church. Following their example, their daughter Victoria donated a further 10,000 sqm of land in 2005 to the same village with a vision for a Secondary School to be built. It was a way to offer educational opportunities to the young children and help the families who could not afford to send their children to a school three miles away from the village.

During a visit to Calingag in the summer of 2006, their daughter Linda, and her family, who reside in London, immediately saw the needs of the newly raised makeshift school and recognised that the children on the Island should be given a decent standard of education so that they will not be forced into low paid manual labour jobs.

Having lived there as a child and experienced the difficulties there concerning education, whether it be the distance that the children have to walk 2-3 miles to get to the school, or the disappointment of not being able to continue with studies because of lack of funds, Linda understood what the children needed and discovered a desire to make sure that they had the best educational experience possible for them. In London, Linda started collecting unwanted books from various charity shops, second-hand books stores, libraries and neighbours, and for over two years now has been shipping the books to the Philippines. In October 2008, the Manlises rice warehouse was converted to a temporary library so that the children and their parents could have access to the books that have been sent so far.

After two years of hard work, training and dedication, and with a great amount of help volunteered by member of Trustees, who offered their time, skills, and enthusiasm, SIKAT was finally entered in the Central Register of Charities, much to the delight of Linda, who is amazed at how quickly the Manlises’ dream has become a reality.

SIKAT was born to give children hope.

We hope that Sikat will help to transform their lives and that it will provide a positive change for generations to come.

Sikat was founded and registered as a main charity in England and Wales on the 21st April 2008.

Stay on top of what's happening at SIKAT.

Sign up to receive periodic SIKAT Newsletter.Read Our Latest Edition »